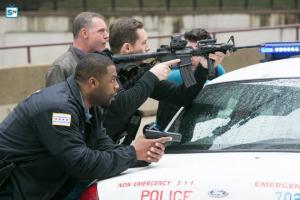 In the last episode, the bombing of a trendy café is investigated, and a major blunder lands Atwater in hot water.

In this week’s episode, titled “Push the Pain Away”, a man holds a building hostage and the only one that can save them is Voight.

Intelligence Rookie
Burgess is up in Intelligence now and her first case is working a shooting that happens at a local gym. They are able to catch one shooter, but the other three got away.

Lindsey and Voight figure out that the shooting is linked with Lancaster Chemicals but they don’t know why they are doing this. Despite being a little out of it, she is able to figure out why the shooters are going after the company. He thinks that the company is responsible for killing his daughter.

Atwater has a hard time adjusting to not being in Intelligence. He keeps making decisions as if he’s in Intelligence and going off hand-cock forcing Roman to follow in his step.

Burgess proves her worth as her and Oslinksy are able to figure out the real motive of the shootings. Not bad for her first case. But what we all knew would happen, she is not going to want to go back to patrol.

Standing Tall
When Intelligence finds the next hit, Voight stands up for the innocent people at a building as he goes inside to try and keep the shooters from being trigger happy. He knows that there is something off with them and he trusts Halstead to cover his back. He is the best long shot on the team. They are able to work together to take down the shooters with none of the hostages being hurt.

A win for the good guys.

Now off to find the third shooter.

Rabbit Hole
Lindsey is falling further down the rabbit hole. She is getting more and more depressed and that bottle is looking more and more friendly. She tries to keep her depression of losing Nadia from effecting her work, but it’s a battle that she is losing.

Trying to help Bunny gets her a guy, but it does nothing but make it worse.

In the next episode, Lindsey spirals further out of control and it leads to a big mistake as she shoots another cop.