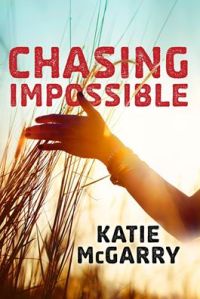 The cover for the story Chasing Impossible by Katie McGarry has been released by the author.

In Chasing Impossible, Tough and independent, 17-year-old Abby lets very few people into her inner circle. It’s common knowledge in her Kentucky town that she deals drugs, but not even her closest friends know why. But when a deal goes south and Abby’s suddenly in danger, she finds herself reluctantly forced to lean on daredevil Logan—a boy whose restless spirit matches her own.

Logan has his own reasons for wanting to keep Abby at arms’ length. But he never expected to find in her the one person who might help him face the demons he’s tried so hard to run from.

Together, Abby and Logan will have to make a decision: let their current circumstances weigh them down forever…or fight for the future they both thought was impossible.

Chasing Impossible is only available for those who pre-ordered Nowhere but Here. If you haven’t registered you’re pre-order yet, you can go here. To pre-order, click on one of the links below.

What do you think of the cover?