In the last episode, SVU investigate a kidnapping of a little boy who the mother may be involved in.

In this week’s show, titled “Surrendering Noah”, Johnny D is on trial and is looking to get his rights back for Noah, and Benson will do anything to stop that from happening.

Adopt Noah
Benson passes the test and is able to adopt Noah but there is a little hiccup as Johnny D uses his trump card on Benson. He wants Noah back. But only as a way to get back at Benson.

Johnny D’s lawyer brings him some information that may get him out of jail. He finds out that he is the father of Noah and they are going to use that to try and get Johnny D cleared. They go to Barba with a deal that makes it so that Benson now has to make a tough decision.

When the case goes his way, he contests the adoption and now Benson might lose Noah. The only way she can keep him is to convict Johnny D. 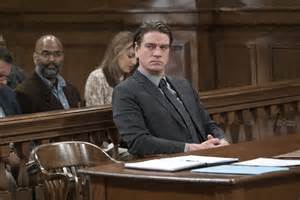 The Trial
Timmer and Selina are gearing up to testify in trial but both of them are not very trustworthy. Sure one or both are going to screw SVU over.

The rock solid case that Barba had against Johnny D suddenly comes down in flames as his star witnessed, Timmer, is murdered by one of his other lackies, and then another witness testifies that Johnny never hurt her.

When the trial goes south for Johnny D, he uses a distraction to get control of the court. He shoots the judge and Amaro gets shot but not before he kills Johnny D.

Moving on Up
Amaro tells Benson that he is going to try and become Sergeant after she gets promoted. He seems very eager about it but of course Tucker says that he probably won’t because of his history.  The phrase “Don’t fall in love with the job, kid. She’ll never love you back” fits for Amaro’s current problem.

This season we have seen a lot of ups and downs with the unit. We’ve said good-bye to some familiar faces and hello to some new ones. Benson finally gets her dream of being a mother and leading the unit. Amaro makes a move to create a name for himself as he takes the sergeant’s test, hoping to fill Benson’s spot when she becomes Lieutenant. Too bad his history prevents him which means a spot is still open. Rollins to move in?

Amaro instead uses his injuries as the time for him to retire, especially knowing he’s not going up. This means that we are going to get a new face around the squad next season.

Earlier today, Examiner spoke with one of the guest stars Jas Anderson (Timmer) about his time on SVU.