In the reboot and fan favorite, Heroes Reborn, we start four years after the events from the last show. Noah Bennett returns as he tries to figure out who’s behind the terrorist attack on Evos in history. If you are new to the game, Evos are the name for these people with the special abilities (think mutants in X-Men). It wouldn’t be a reboot without a bang at the beginning (literally) as Odessa, Texas gets attacked and leaves the city in shambles. Now, the world turns against the Evos as they are blamed for the attack.

In the season opener, titled ‘Chapter 1: Brave New World’,  Noah Bennett attempts to start his life over but gets sucked back in when Quentin tries to find out who is behind the attack in Texas while Luke and Joanne try to avenge their son.

The same problem that existed last time, still exists now, especially after the attack. The Evos are the enemies that the humans are trying to get rid of. The Evos try and struggle to fight back, but they know that it’s going to be a long battle. And it’s not going to get any easier when the Evos can’t tell who the bad guys are. It starts with Luke and Joanne killing off a room of Evos.

Luke and Joanne are not the only ones trying to get rid of the Evos, as there is another man that has a high interest in Tommy. When they try and pick him up, he is forced to use his powers to save himself and Emma (the girl he’s secretly in love with) which of course causes her to freak out because it’s not every day that you see someone just make someone else vanish into thin air. When the school bully sees what Tommy can do, he blackmails him into using his powers to get rid of his step-father who abuses him and his mother but he can’t. That would make him like the other Evos who use their powers to punish the humans. Despite the fact that step-father may have ‘deserved’ it. 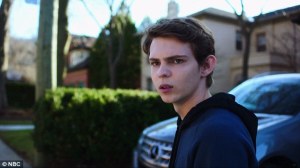 Tensions are running high for Luke and Joanne as they try and figure out how to get back to reality and they start blaming each other for their son, Dennis’s death. Joanne begins to question her motive for wanting to kill all the Evos. But Luke is able to finally to figure out a way out of the room. As the show goes on, we learn that Tommy sends the things he makes disappears to the place he’s thinking about which means Luke and Joanne went to the place where they observed Tommy.

Noah is trying to forget all about his past with the heroes, but finds it hard to let it go completely. Conspiracy theorist, Quentin, stalks Noah and tries to get him to talk about what happened in Texas. Noah doesn’t want to fall back into the life that revolved around Evos and humans, but his curiosity is piqued and now he wants the answers. He meets with an old friend, named Rene, and he learns that he, himself, may have been responsible for Texas and that there is something bigger coming.

When he looks further into the mystery surviving the Texas attack, not only does he find out that he knows more than he thought, but also that his daughter didn’t actually die during the attack. Quentin wants Noah to find out what’s going on because ‘they’ (probably the humans) took his sister and he thinks she’s still alive. He wants to save her. Going to be a long, uphill battle if he wants any chance to find out what happened to her. 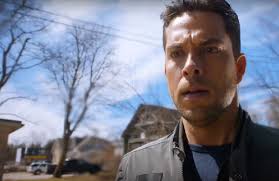 Carlos is another Evos that tries to let go of his past (which involves having to lie to his nephew, Jose, and his brother Oscar for what he did). A Batman-looking man, named Matador, makes his first appearance and finds himself fighting off the humans as they try and take down the Evos. It looks like the capped heroes are going to return and help save the Evos. And guess who he is? It’s Carlos’s brother, but the fight takes his life. Looks like the Matador is going to have a new man behind the mask. He starts with trying to find out who attacked Oscar in the alley. He learns that Oscar was working an underground railroad to save the Evos to go from the US to Canada.

Throughout the show, we get to see two gamers looking for a place called Evermore, which was hidden inside a video game. Miko is the one that goes through the door and when she uses the sword she is transported to a video game where she has to fight off three samurais to save ‘him’, who turns out to be her father. She works with fellow gamer, Ren, to save him. There is likely to be some kind of love interest between the two of them. It’s hard to figure out the connection between this story and the other main story, but like Heroes, they had a lot of storylines going on at once. Hopefully there is some kind of connection with this one and the main story.

The reboot is going to ask the question of whether or not it can keep up with the other superhero shows that are on TV now. When the original Heroes premiered it was the lone show and fell short of expectations after the first season. We will see if the reboot has the staying power not that superheroes are a lot more popular now than they were when Heroes premiered.

In the next episode, Tommy figures out why he is beign helped by the stranger, while the war between Evos and Humans begins and wages on.