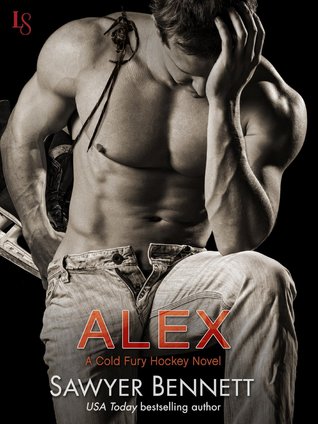 In the first book of the series, we follow NHL superstar Alex, the star of the Cold Fury team, who is forced to try and clean up his image with the help of Sutton Pierce. While it’s supposed to be about the charity, it turns into something more, for both of them.

We follow a hockey team around as they fight with the urges of being a celebrity (such as money, alcohol, drugs, women) and it shows that not everyone falls into the cliché. Yes of course there are some of those, but not all the athletes are like that. Alex for his credit was like that but as the saying goes, he changed his ways for the love of a good woman. The only thing is though we don’t get to see that transition. He goes from one extreme to the other with really no push or shove on his part. If he really was the jerk that he was said to be, he would have been more reluctant to change. Especially since he was forced.

With that said, that did absolutely nothing to deter my feelings about Alex and this book. He becomes that swoon-worthy love interest that we all love to see in love stories and some of the things that he does, it’s hard not to go weak at the knees. He becomes extremely sweet and sensitive to Sutton and becomes a different man for her.

Sutton has been through a lot in her life, more than anyone really should and when she meets Alex she is all swooning over him and not because of his name or his money, but because of him. For Alex that is a breath of fresh air and for us we get to all live vicariously through her. She deals with the curveballs that life throws her better than a baseball player and she is the one that has to show Alex that there is more to life than just playing hockey and sleeping with woman. That if he wants to be happy, then he has to accept that he deserves it.

This is what Sawyer Bennett does best. She is able to create characters in a world that we can’t help but love. That is the case in this situation as we fall for Alex probably harder than Sutton. Be prepared because it’s only going to be harder and harder not to fall in love with these hockey players.

What did you think of the book?

5 thoughts on “Review: ‘Alex’ by Sawyer Bennett- hot love story that will melt the ice”