The highly anticipated third book in Katie McGarry’s Thunder Road Series is being released today! LONG WAY HOME is a Young Adult Contemporary Romance being published by Harlequin Teen! Grab your copy of the next book in this emotionally charged series, and don’t miss Violet and Chevy’s story! 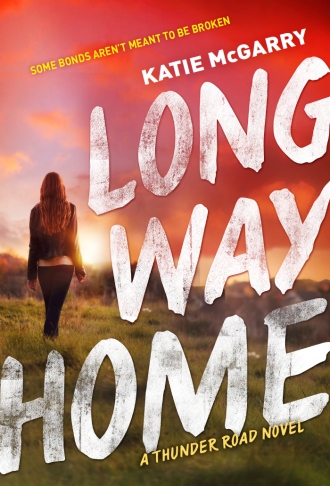 Seventeen-year-old Violet has always been expected to sit back and let the boys do all the saving.

It’s the code her father, a member of the Reign of Terror motorcycle club, raised her to live by. Yet when her dad is killed carrying out Terror business, Violet knows it’s up to her to do the saving. To protect herself, and her vulnerable younger brother, she needs to cut all ties with the club—including Chevy, the boy she’s known and loved her whole life.

But when a rival club comes after Violet, exposing old secrets and making new threats, she’s forced to question what she thought she knew about her father, the Reign of Terror, and what she thinks she wants. Which means re-evaluating everything: love, family, friends . . . and forgiveness.

Caught in the crosshairs between loyalty and freedom, Violet must decide whether old friends can be trusted—and if she’s strong enough to be the one person to save them all.

We have seen Violet and Chevy’s roller coaster romance from the views of other people and now we finally dive right into it. Chevy is stuck between the two worlds that he loves so much, the Terror and the one football life. But more importantly between his grandfather and his love for Violet and his mom.

The story kicks right off with a big conflict for Chevy and Violet that ultimately dictates the problems that they both have throughout the rest of the book. The war is brewing and only getting worse between the Riot and the Terror but on the plus side we get the answers to a lot of the questions that we have from the other two books.

There is a surprise, but not so much if you read the other two books, in the Pushing the Limits series. We get to see how both worlds are connected and the connection will absolutely blow your mind. I loved how McGarry was able to connect them while keeping them separate at the same time.
I think that the biggest thing that I pulled from this story is that it’s about both Violet and Chevy finding their voice. Chevy, like Violet said a few times throughout that the book, has a hard time making a decision and telling those around him what he wants. Violet is the opposite. She voices her opinion to anyone that will listen. Only problem is that nobody actually listens. That struggle and frustration that she has comes off ten-fold through the pages that you feel just as frustrated as she does.

The writing that Katie McGarry does something that I haven’t seen in to many other authors. She does get you emotionally attached to the characters (as many authors can do) but she can make you feel what the characters feel. That is beyond just writing down words on page. That writing that doesn’t only paint the picture, but grabs at your heart and tells you which way to feel.

“An intoxicating and unforgettable story that kept me glued to the page.”

Katie McGarry was a teenager during the age of grunge and boy bands and remembers those years as the best and worst of her life. She is a lover of music, happy endings, reality television, and is a secret University of Kentucky basketball fan.

Katie is the author of full length YA novels, PUSHING THE LIMITS, DARE YOU TO, CRASH INTO YOU, TAKE ME ON,  BREAKING THE RULES, NOWHERE BUT HERE, and WALK THE EDGE and the e-novellas, CROSSING THE LINE and RED AT NIGHT. Her debut YA novel, PUSHING THE LIMITS was a 2012 Goodreads Choice Finalist for YA Fiction, a RT Magazine’s 2012 Reviewer’s Choice Awards Nominee for Young Adult Contemporary Novel, a double Rita Finalist, and a 2013 YALSA Top Ten Teen Pick. DARE YOU TO was also a Goodreads Choice Finalist for YA Fiction and won RT Magazine’s Reviewer’s Choice Best Book Award for Young Adult Contemporary fiction in 2013.

Are you going to buy the books?