Jesse Lee is the worst!

He’s a multi-millionaire, triple-platinum-selling, Grammy-Award-winning man-slut—a worldly, self-indulgent heathen. I wouldn’t sleep with him if he were our last chance to ensure survival of the human race. The only reason I put up with him is because he’s my boss’s brother.

Whatsherface is one of those holier-than-thou types.

She’s bossy, has a horrific singing voice, and she’s so ordinary, she practically blends in with the eggshell-colored walls—the complete opposite of anyone I’d bang. The only reason I put up with her is because my career is on the line.

Playing by Heart is an enemies-to-lovers romance where opposites not only attract, they ignite. 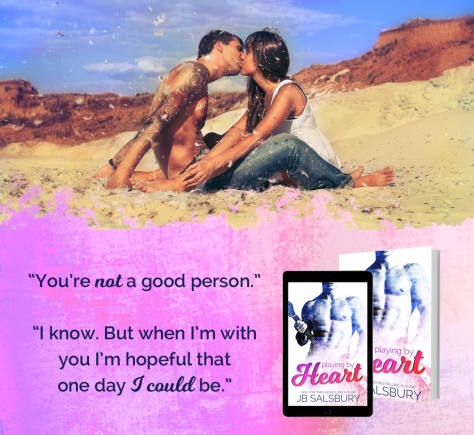 This is technically a new kind of book from JB Salsbury but she has written touches of a rock star in her fighting series with Rex. In this story, Jesse is that stereotypical rock star that fell to far down the rabbit hole and needs to find a way out before he loses it all.

I liked that Salsbury touched on some sensitive stuff like religion and cults (or cultish). I would have liked to have seen more of Jesse and Ben’s past because I really thought it was interestingly to see what happened when they were younger and how it shaped them as men. I am hoping that we get another book in this world because it’s very interesting and I think seeing Ben and his part would be so interesting. Almost on the same level of Rex’s book.

It takes some time to get into the romance part of the book as they don’t get together until about 40% into the book. But that beginning part we get entertained at their back and forth. I love that Bethany doesn’t just let Ian do whatever he wants. And I like that it takes some time before Jesse finally starts to change. Because for me that doesn’t happen with rocker romances. They usually just change right away. I like that Jesse had to mess up a little bit before he changed.

While it’s not exactly sure if this is part of a series I certainly would love it if it was. I would like to read a book about Ben. So if that could happen, you got my ok.